Nothing is so intolerable to man as being fully at rest, without a passion, without business, without entertainment, without care. - Blaise Pascal

Posted by Sometimes Thoughts at 5:21 PM No comments:

life is beautiful. no salt, but a shame: beauty of itself is not a character trait. men and women who use their looks as a characteristic trait are flawed. bikini clad narcissistic traveling public figures on instagram, anyone? you're all the same image of one another, and boring anyway. no, i don't want any of your fit tea. take this brutal assertion as an example from reddit (r/roastme).

Your implants and cry for attention on here only highlight what you and everyone else already suspect... you are insecure.

Likely your insecurity stems from always questioning if you really ever earned anything by merit. Most people probably hand you things because they like looking at you. But that's made you vapid, shallow, and unable to perform in any way that adds true value in the world.

Your relationships are superficial. Your romance life always has the shadow of doubt. Does he love you... or how you look? If you were disfigured, would anyone give you a second glance based on personality?

That nagging feeling will keep you looking for validation. It keeps you in the gym. It makes you post photos online looking for praise or positive attention. It keeps you going back for a nip here and tuck there. Before long you'll look like Donatella Versace with the personality of one of her handbags.

You'd be better served working on being a better person than hunting for attention on Reddit, but you'll likely die young and your grave will be about as shallow as your personality.

Well this blew up.

First off, thanks for the gold.

I do want to ask for the folks being vitriolic in the comments, please give this girl a break. She deleted her account. She was probably just marketing herself and didn't know what she was doing. Other posts outside of a roast someone asks to participate in are a violation of the /r/roastme rules and are generally just not cool.

To those who think I went too far, or was mean and out of line with the nature of the sub... sorry. My sense of humor is dry and I enjoy saying unexpected things. That combination came off as more mean spirited than I generally am.

A few of you have been doxxing me or the girl who posted this. That is a clear violation of Reddit's TOS and is creepy and possibly illegal depending on how far you're taking it. Don't harass that girl on other accounts if you find her. Just leave it at what it was, a roast. 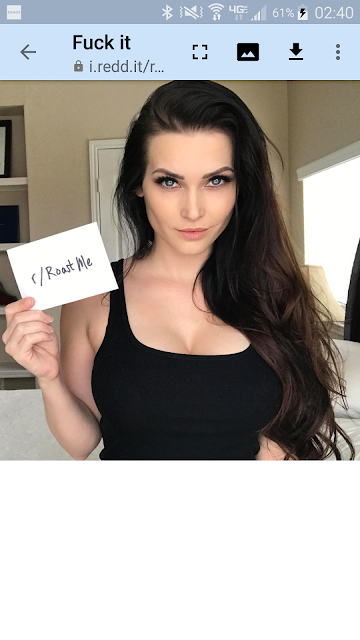 Posted by Sometimes Thoughts at 2:48 AM No comments:

hard not to be radicalized given the times with it's fed shit. 13, an irrationally feared #, a construct; shoenberg, hotels, elevators, the devil, 23, what have you - strange creatures we are. for a thought, to blast the ego out of the water: the solar system on a football field scale. at the .7, 2, 3, 4, 6-10, 16, 40, 79 yard lines - inner planets, asteroid belt, outer planets.., dime-sized sun (goal line), inner planets sized single grains of sand, jupiter-sized width of a quarter, of which can contain over 1300 earths, respectively...bear self-importance irrelevant. your blind, failing, rat race money grabbin, arrogant asses. any cosmic solar event wipes human history from the naked eye. i don't care what you think you are, shut the fuck up.

microscopic grains of sand on a grain of sand. in a solar system.

shut the fuck up. gain some cosmic perspective.

Posted by Sometimes Thoughts at 1:35 AM No comments:

Posted by Sometimes Thoughts at 9:16 PM No comments: